Eliminating the need for peripheral devices, the VR-50HD MK II combines a 12-input/4-channel multi-format video switcher, a 12-input digital audio mixer, a multi-viewer touch screen, and an AV streaming output via USB 3.0. The VR-50HD MK II’s assignable, worry-free inputs allow the use of any combination of four SDI and HDMI sources for countless configurations and applications. The new input assignment buttons on the VR-50HD MK II make it easy to use all inputs on the switcher with on-the-fly assignment of inputs to crosspoints on the switcher. The unit’s versatile I/O capability, also including RGB/Component and Composite inputs, accommodates professional cameras, computers, presenters’ mobile devices, microphones, and more.

The VR-50HD MK II’s redesigned user interface allows its expanded feature set to be accessed and controlled with ease. The large built-in touch screen multi-view monitor allows concurrent viewing of Preview and Program, of the four inputs assigned to crosspoints, and of four still images (up to four still images can be loaded from USB to internal storage for immediate access). Dedicated broadcast-style buttons give instant access to various functions – no longer is it necessary to drill down into cascaded menus. Each audio path now has its own Solo and Mute buttons.

Professional quality audio mixes for events and live web streaming, including situations where having a dedicated audio engineer is not feasible, is facilitated by the VR-50HD MK II’s new intuitive interface with on-the-fly Auto Mixing of levels and built-in Anti-Feedback. Settings allow certain audio inputs to take priority so that when a presenter speaks, the other audio levels automatically reduce. Audio from input sources can automatically change when you switch video sources with a “Audio Follows Video” operational mode, while a “Video Follows Audio” mode can switch cameras based on who’s speaking into an assigned microphone. The VR-50HD MK II provides a variety of standard audio inputs including XLR/ TRS combo jacks with 48 VDC phantom power, an RCA stereo pair, or de-embedded audio from 3G/HD/SD-SDI and HDMI inputs.

Robotic Pan/ Tilt/ Zoom (PTZ) cameras can eliminate the need for dedicated camera operators while still providing studio-grade broadcast quality. During production, PTZ cameras can be placed in discreet locations thanks to their small size. The VR-50HD MKII can directly control select JVC & Panasonic PTZ LAN cameras, without the need for a dedicated PTZ camera controller or operator. Up to six compatible PTZ cameras can be controlled via a single LAN port. 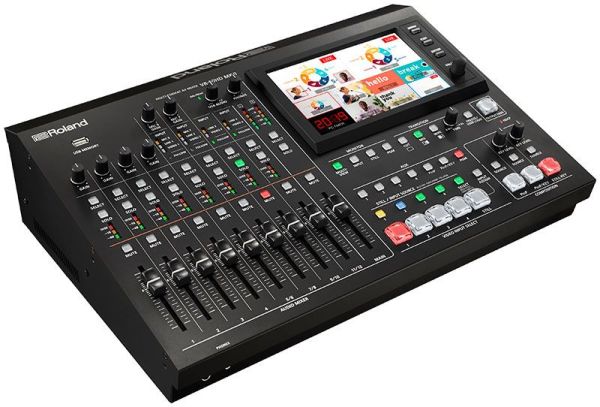 For more than 50 years Gencom has been delivering premium design, products and solutions to the Media industry. Let us help you plan and deliver your next project.